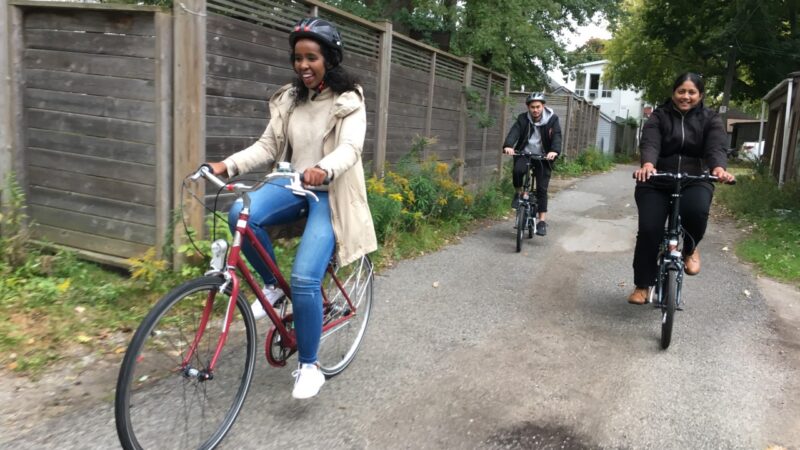 A few weeks ago, I was sitting in a virtual seminar mostly comprised of other BIPOC attendees when a young woman shyly said, “Some of you might hate me for saying this, but the infrastructure isn’t always the most important thing in determining whether or not someone cycles”. I thought her comment was brave. Bear with me, and don’t hate me for saying this, but I also thought it was true.

Her comment alluded to something I’ve been wrestling with since I joined TCAT last year. What role does culture play in the future of large-scale cycling adoption? Particularly in a city like Toronto, where racialized people make up more than half of its residents. Further, what is the limit on the scale at which cycling can take off in Toronto until we vastly overhaul who we — white and BIPOC communities alike — instinctually view as cyclists?

I am a woman of colour, I haven’t got a clue how to fix my own bike, and I’ve never found Lycra to be particularly flattering. Quite honestly, I felt a bit like a fish out of water when I first started working in active transportation. I do, however, feel physically and mentally unstoppable when coasting down a hill on a summer’s night on my bike, and without hesitation, believe in the power of active transportation to positively transform the way we experience cities. I love biking. I don’t love bike culture. Yet somehow, culture is the exact thing that accelerated my interest in biking — my friends started doing it, so I did too.

On the ground, I’ve seen similar themes reflected in local groups like BIKEPOC and ManDem Cycling Club, who have formed initiatives around the idea of culture and community — a nod to and acknowledgement of the fact that many conversations that have historically dominated the cycling world, haven’t served us all. So instead, we’re finding ways to create ones that do and in turn, an alternative cycling culture is flourishing.

TCAT has been onto something similar for years. Through creating suburban bike hubs, we’ve experimented with the idea that in some cases, it might be helpful if cultural change precedes policy change — especially when there isn’t existing political willingness to invest in sweeping infrastructure right off the bat. And so, if we focus on addressing some of barriers that live at the intersection of culture and cycling and create spaces for people to form connections with cycling on their own terms, then we can set ourselves up to better scale the movement.

My vision for the future of the world is one in which the street grid and bike grid become indecipherable — a visual cue that our governments have finally and decidedly prioritized people over vehicles. Infrastructure is paramount and it always will be. But there is also a cultural element to this shift that has been bubbling to the surface; and BIPOC communities have been and will remain at the helm of leading it. The future of cycling is exciting. And it will depend on culture and infrastructure alike, evolving and adapting in tandem.